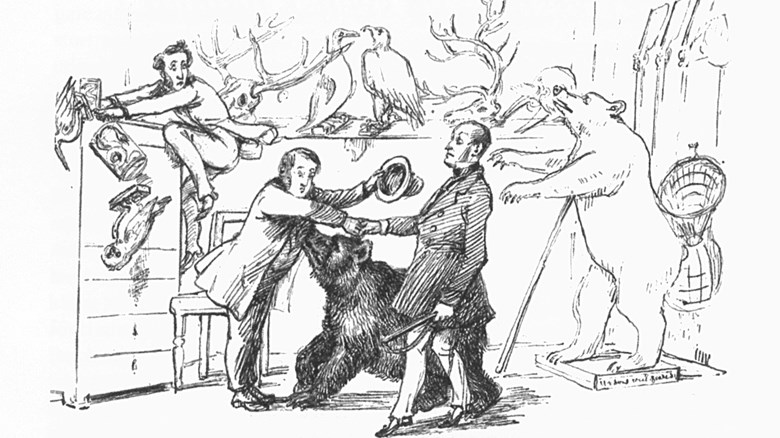 “This is a funny drawing of Lloyd in his home made by the artist Fritz von Dardel in the 1850-60s. There are descriptions from Lloyds home from this time and part of the home looked like this, like a natural historical museum. He also had one or two living semi-tame bears in his home. Some times he took them with him when he went to a party or just walked the streets of Vänersborg.”

Llewellyn Lloyd – 1792-1876
Charles John Andersson’s British father was known as a legendary bear-hunter and zoologist in Sweden. Below you will find an image gallery of the illustrations from Llewellyn Lloyd’s books, ‘Scandinavian Adventures’.

Few know that western Sweden was ´discovered´ in 1820 by a British nobleman who sent home exotic stories from this region. Llewellyn Lloyd was quite exotic himself and could be seen walking the streets of Vänersborg, leading a live bear on a chain.

He was born in the summer of 1792 into one of London’s more affluent banking families. The young Lloyd had no intention of following the family tradition into London’s banking and financial world. Instead hunting and zoology completely captured his interest.

Lloyd arrived in Sweden, attracted by what for an Englishman at that time,
was exotic nature and big game hunting where he could pursue bear, wolf and lynx.

He moved to the  Vänersborg area of West Götaland in 1830, attracted by salmon-fishing in the Göta Älv. He rented the manors of Rånnum, Gäddebäck and Fredrikslund before he finally moved to Vänersborg, the regional centre of West Götaland, located at the southernmost point of Lake Vänern in central Sweden.

Lloyd became a person of mythical proportions. Not only was he a renowned angler but he was also said to have killed over 100 bears. He kept wolf cubs in an attempt to rear them as hunting dogs and the occasional orphaned elk. He had a reputation as a womaniser and fathered many illegitimate children. We know that Lloyd provided for at least three of these children as best he could, Charles and his two sisters and perhaps even other of his sons. When Charles headed for London to seek his fortune his impecunious father gave him a set of twin bear cubs for sale to finance his adventures. One of the bears was a happy creature while the other was morose. The buyer chose to take only one cub, the friendly one. The baby bear that remained with Charles was beside itself with rage at the separation and fell into a deep depression. Charles realised that his bear might die of grief so he tried to buy back its sibling and in the end persuaded the buyer to take two bears for the price of one.

For the British audience, Llewellyn Lloyd was an explorer, whose extensive travels in Sweden were published in a large number of travel, hunting and ethnological stories. His most famous books are the ‘Scandinavian Adventures’.

Lloyd corresponded with, among others, Charles Darwin. He also taught the young Axel W Eriksson, the basics of zoology just as he had done his own son Charles John Andersson.  He sent Eriksson to southern Africa to be an apprentice to Charles. It was Eriksson who in the 1880’s came to donate the extensive bird collection from southwest Africa to Vänersborgs museum.

Llewellyn Lloyd died in 1876 and his tomb erected by his grandson Charles Llewellyn Andersson in 1905 is situated at Västra Tunhem in the Vänersborg Kommun.